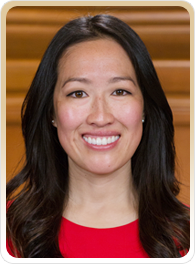 Former Supervisor Katy Tang served as the District 4 (Sunset/Parkside) representative on the San Francisco Board of Supervisors.

Katy has been a strong advocate for supporting housing opportunities for middle-income families. She partnered with the Mayor’s Office and Planning Department to develop incentives and tools to keep our middle-class families in San Francisco. In partnership with the Mayor’s Office of Housing & Community Development, Katy helped launch the “Home Match” program, which pairs homeowners with low-income home seekers as a way to address San Francisco’s housing shortage with existing housing stock.

As a product of the San Francisco Unified School District, Katy understands the funding challenges with our public school system and supports our local schools by providing regular grants for efforts in Science, Technology, Engineering, Arts, and Mathematics (STEAM).

As a member of the San Francisco Collaborative Against Human Trafficking (SFCAHT), Katy works with city agencies and partners to end human trafficking through education, outreach, advocacy, and by supporting human trafficking survivors.

Katy is also a champion for workplace policies for new families. She spearheaded a Charter Amendment passed by voters in November 2015 that enhanced the City’s Paid Parental Leave policy and sponsored legislation unanimously passed by the Board of Supervisors to improve lactation support for new mothers returning to work.

Katy works closely with the Ocean Beach Master Plan steering committee, where she has been engaging with city agencies and partners to implement recommendations for a more sustainable future on San Francisco’s Pacific Coast.

To ensure that everyone, especially those with disabilities, have access to the services they need, Katy spearheaded legislation to require that all entrances to places of public accommodation in San Francisco be accessible.

As an animal rights advocate, Katy worked to ensure that the City will build a new animal shelter that will adequately serve the needs of the animals and the employees who work there. She also hosts an adoption event in her office each year in partnership with SF Animal Care & Control. In 2015, Katy sponsored legislation to ban the performance of wild or exotic animals in San Francisco for entertainment purposes.

Katy has worked on a number of issues to improve the quality of life for residents. She spearheaded the first ever district-wide strategic planning effort, called the Sunset District Blueprint, to identify short-term and long-term initiatives to improve the neighborhood, and launched the city’s first Front Yard Ambassador Program to assist residents with front yard landscaping installations and to divert rainwater from the city’s sewer system.

Katy grew up in the Sunset District and is a graduate of UC Davis and University of San Francisco School of Law.